Unless you’re still asleep at the wheel, you know a great evil has spread throughout the land, even reaching it’s tendrils into the highest levels of Government. This evil is child molestation, and sex trafficking. Both of which are highly fueled by a wide-open, unfiltered Internet.

What Kibosh cannot do is filter inside of data silo’s like Craiglist, and Reddit. We can only block, or allow access to these sites. It’s up to the data owners – Craigslist, Reddit, Twitter, Facebook, etc. – to clean up their own sites, something that shouldn’t have to be said frankly, and something they’ve decided not to do.

In a rare show of public service, last Wednesday, March 21st, 2018 the Senate passed the The Fight Online Sex Trafficking Act (FOSTA) that had already been approved by the House allowing prosecutors to go after websites that host ads for services that are likely prostitution and/or trafficking. This legislation would do multiple things; first it would encourage the closing of websites notorious for hosting traffickers such as Craigslist personals and Backpage.com, second it would allow legal ground for victims to come forward and pursue civil claims against these sites, and third it would allow for persecutors to pursue criminal charges against the traffickers and the websites that host or enable criminal activity such as Reddit, Craigslist and Backpage.

This is what you see now when trying to access Craigslist Personals: 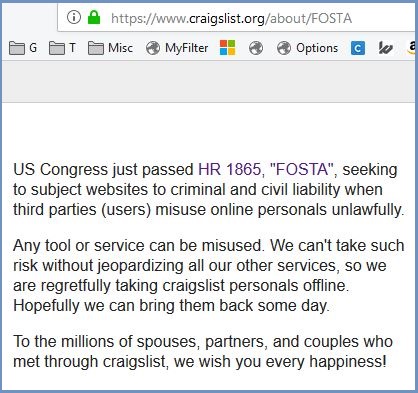 Many large tech companies have come out against the bill stating that it would require them to moderate content and be unfairly liable for the actions and content of users setting out an unmanageable scenario that may end service, according to Vets 4 Child Rescue. Apparently they are not too concerned about the human toll, particularly among our youth and families.

We are at war folks. It’s raging all around us, and it’s a spiritual war, it’s a mind war, and our children are the prize.

Kibosh is a proud sponsor of Vets 4 Child Rescue.